The client wanted an Eagle Scout cake design for her son who just got his Eagle Scout badge for Troop 46 in Berlin Germany. It was important for me to show representations of the American flag, the Eagle Scout logo, the troop number, bronze rope, and the eagle topper which she provided. I thought the eagle cake topper was amazing.

I researched many eagle scout cakes, looked at various blogs, Pinterest, and event and began to exchange my decorating ideas with the client, and then began the creation process. 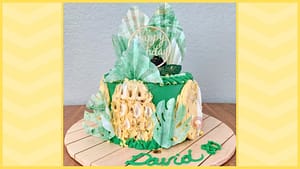 With any cake project, you can choose to pre-cut or mold fondant details (stored in airtight containers) hours prior to making your cake. Sometimes, depending on the design this is not always the best course of action as you may need to measure and assemble on the spot as you go while the fondant is softer and more pliable. This was my process for this Eagle Scout cake. Everything had to be measured and applied perfectly.

While doing the American flag on the bottom it was important for me to lay the stars and stripes in split fashion so they fit opposite each other covering its own side. My flag stripes were approx. 1″ thick so measure your cake, your center, and split the layout. It’s also a little tricky when you use more than one fondant color on the same layers covering it whole.

After the bottom layers were covered to my satisfaction (I waited on the stars to size and assemble later) I used big straws to support the top tier. Five was enough, one in the middle and four in the inner corners to where the top tier would be sitting. Remember, never forget what your “front” will be, what will everyone see straight on?

How to build cake layers of the Eagle Scout Cake

The top tier (on its own cake liner) was covered with buttercream, fondant, and gently placed on top of the bottom tier with a little buttercream underneath to adhere to both tiers. I wanted to add a special touch around the top tier border so I chose some important Boy Scouts “values” done with pressed lettering.

The Eagle Scout logo (edible print with added fondant border to hide edges) is shown in the front and opposite back. The fleur-de-lis cut in red, white and blue fondant is shown on the right and left side of the top tier (the fleur-de-lis plumes symbolize service to others, a duty to God, and obedience to scout law).

After inserting a few straws in the top tier the eagle cake topper was centered (with buttercream to adhere) and bronze fondant rope for extra support and accent. The eagle cake topper for this cake was provided to me, but I found one very similar on Amazon which is very nice and also can be used kept as a keepsake after enjoying the celebration.

Can be found on Amazon

When you have a non-edible object on a cake there are only a few things that can be done to keep that object on the cake.

The troop banner and number are placed left. After properly spacing the stars and wrapping the rope around the base the cake was complete! Success!

Are you tired yet? phew…I was but seeing the results of my 1st Eagle Scout cake were super exciting and my client loved the cake. I hope this cake inspires you. To date, this cake is still one of my favorites.

Looking for some good Eagle Scout cake ideas, this one is fun to make and has the eagle scout logo with an eagle cake topper.

Tried This How To?Let us know how it was!